The earliest reference to a Baptist Church in the historic town of Carrickfergus was in the 1640s. It is believed that it was associated with Cromwell’s troops garrisoned in the town at that time and disappeared with their removal at the restoration of the Monarchy.

In 1862, three prominent businessmen in the town took a courageous step of faith, which in those days could lead to isolation from the community, and were publicly baptised in the sea. Three others joined them to form the Carrickfergus Baptist Church. The first meetings were held in the Larmour’s School room, but in 1863 a building was erected and the church called its first Pastor, Mr William Hamilton. His ministry was greatly blessed and in four years Church membership rose to forty-five. Pastor Hamilton served the church faithfully for 25 years until his death in 1888. Records show the tremendous relief work in which he engaged in the West of Ireland during the potato famine. 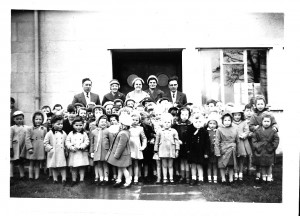 Four pastors, (Haste, Woodward, Dawson, and Flook) then served the church until 1905 during which time the church continued to grow. As Belfast flourished in the early 1900s, Carrickfergus, which in earlier days had been the major town in the area, declined both as a port and as a manufacturing centre. This led to a constant reduction in members who had to move elsewhere to seek work. The formation of a church in Whitehouse, close to Belfast, resulted in the transfer of 20 members at the turn of the century.

For 23 years the Church laboured on without a Pastor and membership continued to decline. The church forged a link with Clifton Park Church in Belfast and Pastor L.E. Deens shared his ministry with both churches.

During this period, and indeed until the 1950s, the church was indebted to the Irish Home Mission (now Baptist Missions) for financial support. The first settled Pastor after the long vacancy was Mr JA Simpson, who came straight from the Irish Baptist College. He is said to have been earnest in gospel preaching, helpful in Bible exposition, diligent in visitation, and notable progress was made under his ministry. Pastor R Clarke served the church from 1933-44. Pastor A Clark served from 1945-1955.

It is interesting to note that it was not until 1959 that electric lighting was installed. Up until that time, the town gas works had provided both heat and light.

The 1950s saw the revival of Carrickfergus as an Industrial Centre, and the opening of major factories connected with the textile industry brought hundreds of people to live in the Borough. This led to the development of major housing estates on the outskirts of the old town.

With the influx of people, the church once again flourished. The establishment of children’s work in the Sunnylands housing estate led to the commencement of a second Sunday School in the area. In the 1960s, the children’s work was further developed by the introduction of The Campaigners, a uniformed organisation. In 1964 a new hall was erected in Lancastarian Street to cater for this growing area of work. Pastors WA Beatty (1956-1970) and H Cunningham (1970-77) served the church during this time.

The Church continued to grow, and with a membership now of almost 100, the old building was proving inadequate. However, as it backed onto the ancient town walls it was impossible to develop further and so in 1979 the church moved to a new green-field site adjacent to the Sunnylands Housing Estate. Within just a few years the debts were cleared.

With a growing membership of 150 and greater need for space, a new church hall was built within the church grounds. This has enabled the development of a flourishing Youth Club and Parent and Toddler group as well as the previously existing Children’s Work. 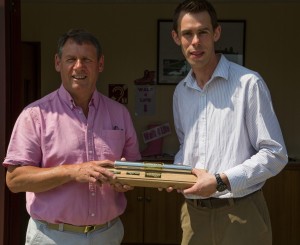 In Jan 2013, Peter Lawther was called to the church to serve as Pastor. The church continues to thrive today as a modern, outward looking church, with a strong missionary interest. To the extent that a new, purpose-built church building was opened in 2015.

The Lord has blessed our Fellowship over the years and we trust has made us a blessing to the people in Carrickfergus. We believe that it will only be in glory that we shall see the full effect of Christ’s blessing upon us.

Tomorrow Devotion & Prayer
3 Feb CB:Kids CLUB
Manage Cookie Consent
To provide the best experiences, we use technologies like cookies to store and/or access device information. Consenting to these technologies will allow us to process data such as browsing behaviour or unique IDs on this site. Not consenting or withdrawing consent, may adversely affect certain features and functions.
Manage options Manage services Manage vendors Read more about these purposes
View preferences
{title} {title} {title}